All about Scottish Viking Beads: a compilation of research

This is part 1 of a two part article about making a viking bead string. This first part concerns archeological finds, and the second part will discuss designing and making the actual necklace.

Every viking woman needs some bling. Some of the bling is used to hold your clothes on (your brooches...) Some of it is a useful part of your kit, some is religious, and some of it is decorative. Since my whole family is for the moment clothed, I've turned my attention to figuring out the details of my viking bling, assembling it, and really finishing off my garb. You can have the most beautifully researched and executed garments ever seen, and if you have not acessories, it is all in vain. Past the turtle brooches, one of the first acessories a viking woman needs is a strand or two of beads.


I tried making glass beads at an Arts and Sciences Schola last September, and had a great time. I even managed to come out of the experience with a few decent beads. I think that given time I could make my own beads, and would thoroughly enjoy it. The sad fact is though, that I need another hobby like I need a hole in the head. For now at least. So I contacted a good friend, Kim, who does fantastic lampwork beads, and discussed her making me some beads on comission so I could make a necklace. I also sent her some pictures of sort of generic viking beads. She came back and said, yes, she could do that, and would be thrilled to, but wouldn't I rather have something more specifically from Scotland where my persona is from? She had looked for something but not had much luck. Needless to say, I was thrilled to pieces, so I went forth and spent the next two days going through every single scottish viking grave report for bead finds. It occured to me, after having done this, that it might be nice for other people if someone compiled this information all in one place so they wouldn't have to spend 15 hours looking it all up. I have attemted to do so here.


Before I get down to the nitty gritty of the individual finds, I would like to note that according to a 10th century arab, Vikings would "go to any length to get hold of colored (glass) beads" (Robert Wernick, The vikings, 94) Some viking beads have been traced to egypt! 1 So you needn't limit entirely your beads by the area that your persona is from. Also, beads could be handed down, so earlier beads might have been re-used in a later necklace (the beautiful piece from Peel Castle, Dubbed the "Pagan Lady's necklace" had beads that were 300 years old at the time the necklace was made. 2). The upside of this is that you can pull from earlier periods, and if there's that one bead you really really love, you can include a couple and make up an interesting story about how you traded for them with a ship captain who had worn out his cloak but just returned from a voyage to whatever place it is. I think for my purposes I think it likely that the majority of imported Scottish beads would have come from the western end of the viking sprawl, so I have not drawn on any sources from say, birka or gotland, for my necklace. This article concerns only glass bead finds made in scotland, york, and the isle of mann with an emphasis on scottish grave finds.

An important note about all the photos below is that these beads have been buried for centuries. the colors are quite faded. Some of the amber or crystal beads look like clay after so long in the ground. When these beads were being worn they would have been very bright, even flamboyant!

After inefectually flailing on google for a while I foud this fantastic resource that lists all of the viking scottish graves, by area, and gives the titles of the most pertinent scholarly sources about their contents. This will continue to be a extemely helpful research aid for me, and I'm so grateful for whoever put it all together. Viking Burials in Scotland, landscape and burials in the viking age 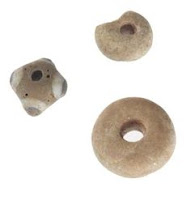 Notes on the Contents of Two Viking Graves in Islay, Joseph Anderson

National Museaums of Scotland, Grave goods from Rousay
The Vikings in Orkney, James Graham-Campbell 130-32
picture from the national museums of scotland 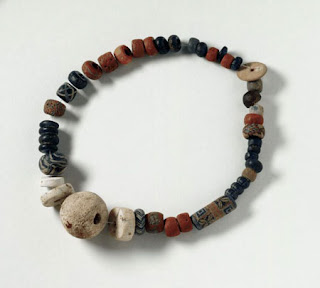 Although this concludes the site specific archeological finds (and I think it's pretty comprehensive oview of pretty much every grave in Scotland with glass beads) I would like to add this wonderful collection from the University of Glasgow. Many beads here to look at! Hunterian Museaum This is especially important because a lot of bead finds are not connected with graves, and therefore are difficult to find record of: either because they were single finds, or because they're buried in the records of an investigation into a dwelling or other living area.

As a further note, many of the graves in Scotland contained amber beads singly, or amber and jet beads. The only known source of jet (considered another form of amber by the vikings, and sacred to Freya 3) during the viking era was from the coastline in Yorkshire around Whiteby. Jet was worked in many of the places that amber was worked, and seems to have made its way around much of the viking world (the pagan lady of peel, Barbara Holgate, 18). It was quite common in the scottish graves I reviewed. So if you are in the process of making yourself a necklace, or loops of beads to hang from your brooches, be sure to attempt to find appropriately shaped and sized jet and amber components. Also popular across the viking world, but not found in any of these graves, carnelian, rock crystal, garnet and amythyst,

In conclusion: All vikings were at least half magpie, and if it was sparkly and brightly colored they liked it and would import it from the ends of the earth (or steal it). Of course goods imported from far away would be more valuable than goods made locally, so use your own judgement and the likely finacial status of your persona to decide what kinds of beads you want in your necklace.

To be continued in Part 2

Mouse
I'm the mother of four beautiful children and one Very Bad Cowdog, living wedged into a little house under constant renovation, with a lot of fiber and fabric. I spend my copious spare time doing fibery things, and sometimes housework.